Double and Triple Distillate in the Tequila Production 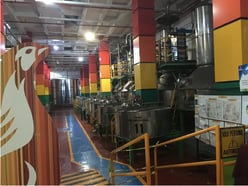 The main goal of our process is to obtain a product that meets the requirements of the NOM-006, which makes reference to the specifications needed so that the product can be exported and distributed worldwide.

What is Distillation used for?

To recover the alcohol generated in the fermentation process and to separate the liquid by means of vapor.

What is the Double Distillate Tequila Process?

First of all, in the tequila industries, a minimum of 2 distillations must be carried out so can actually   call the product tequila. In the first distillation, product the is obtained  is known as ordinary, which is why it is very important to have a double distillation to have the final product called tequila.

The double distillate process is done in two ways: in distillation towers or in stills.

In Casa Sauza, the second distillation is performed in stills, and this activity its done by separating the other residues in order to obtain the heart of tequila. 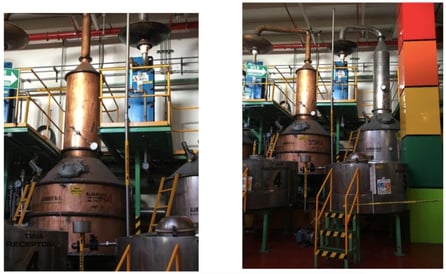 The most common method to distillate tequila, is the use of stills because by using them, we can handle the different sensory profiles that are required to obtain an specific final product.

On the other hand, in distillation towers, the alcohol is concentrated in higher quantities and at the end, we obtain a more neutral product.

In other words, the aromatic and sensory notes that exist in a tequila, are the main characteristics that  make up and describe each kind of tequila. If we use stills for a second distillate, more sensory notes will be perceived in the final product. If it is done using distillation towers, consumers won't really be able to perceive their sensory notes.

The third distillation its done using stills, and this process is always carried out by lots, and the method is always the same. Here we separate the heads and tails of the tequila so we can obtain just the heart.

The separation process of the tequila's heads takes between 2 to 4 minutes, and the first substance that gets evaporated contain unwanted concentrated alcohols.  When the desired alcohol level is obtained, the tails (waste) are separated from the liquid until the stills loads are empty. What is left in the stills is called the heart of tequila.

The heart of tequila its transferred to another still and the same procedure is carried out once more in order to obtain an even more pure tequila. The triple distillation process takes around 6 hours. The stills are made of stainless steel and copper.

Recommendation made by an expert

To have a good quality tequila, it is necessary to monitor all the variables and steps regarding the tequila making process. It is very important to properly separate the heads and tails from the heart of tequila, until we reach the desired alcohol level.

What does a Tequila Distiller do?

Innovation in the Tequila Industy: The Agave Fields

Come and visit Tequila, we'd be happy to show you our tequila making process so you can get to know why Casa Sauza's tequila, is the purest tequila that you'll fin in the market.

The Premiumization of Tequila

Throughout our 11 years of working in tequila production, we have found that one of the most...

With all the information on the internet we have the ability to learn how any task is done and to...

Dilution and Filtration Processes of Tequila at Casa Sauza

Tequila's Dilution Process The dilution of a tequila is when a high grade tequila, which can be of...