As a comment to a previous blog, one of our readers asked questions about crop management. Sauza loves communicating with its readers so we are more than happy to give an answer to their questions. Here are our answers to this comment:

Planting and Harvesting of the Agave Plant

How do I choose the right land for the planting?

Almost any land is good for the planting of agave yet, those that go deeper than a meter or more, are better. It is crucial though, to find a land that doesn't flood or show water logging during the rainy season, since the excess of water may cause damage to the root of the plant and thus, affect its growth and development.

This plant develops best in loam soils. If they are too sandy or clayey, they can be handled with amendments (application of compost and lime when necessary).

How is the agave planted?

In the case of the Blue Agave, its reproduction is handled by seedlings which are produced by a mother plant during its whole life yet, those that are harvested between the plant's third and fourth year are the best. Seedlings that are between 8 and 11 cm long are considered the best.

Other agaves are planted with seeds.

When seedlings are harvested, they are treated with fungicide and insecticide, then they are left to heal and are planted afterwards. It's always best to do this during dry season and it's even better if it's done during that part of the dry season that's closer to rainy season. 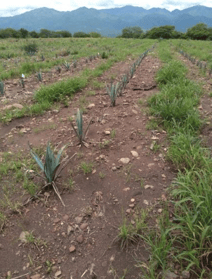 What matter most is to keep the crop line clean. Although the corridors may have some weeds, they should preferably not exceed half the height of the agave. The presence of weeds on the site helps reduce erosion and maintain beneficial microorganisms that help in the development of agave.

The second most important thing, is the monitoring and control of pests, especially those that are drilling, because not only they affect the development of plants but they also cause their death.

Nutrition is very important; we recommend keeping a balance of the soil's nutrients so that the plant takes whichever it requires. Agave doesn't respondo much to foliar fertilization. 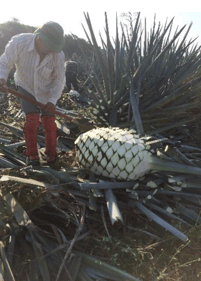 Once the agave plant reaches an optimum size for its harvest and has enough concentration of sugars, the harvest is carried out (this usually happens after the fifth year). To harvest the agave pineapple, a tool known as coa for the jima (the cutting of the pineapple's leaves) is used. This tool cuts the leaves and the stem at the very base of the plant.

Is the Agave Plant Perennial?

For how long is the plant productive?

Blue agave is mainly used for:

The part of the plant that's used for these products is the pineapple, which is formed by the stem and the base of the leaves, so only one crop can be harvested and used each time. Normally, the harvest is carried out after the plant's fifth year, although sometimes it's left for longer (6 to 8 years).

The Agave is a plant that grows on semi-desert places and in general, it doesn't require much water, however, in the case of blue agave, it's been reported that whenever the precipitation is of less than of 400 mm, it has problems developing.

On the other hand, although many agave species withstand low temperatures, the blue agave can't stand frost and whenever the temperature is of zero degrees (Celsius) for more than an hour, the damage is very evident.

Learn More About our Processes

I hope that I've answered all of our reader's question well. I f you have any other questions, feel free to write them at the "comments" section; we love to read what you have to say and be able to reply!

If you'd like to learn more about our production processes, you can:

Learn all about the production of the agave, as well as of the different kinds of tequilas that we have!

¿What is The Gentle Extraction of Agave Sugar?

Whenever our Casa Sauza's visitors take the guided tour of our facilities, they usually ask us why...

The Agave Plant: Process to Follow for an Excellent Crop

At Casa Sauza, we care about producing the best quality agave, so we took the challenge of getting...

The Agave Plant: Process to Follow for an Excellent Crop (Part 2)

In my previous blog, I wrote about some of the agave production processes that we carry out in...